From Düsseldorf to Hod Hasharon

Dorit Brauer, a German who has lived in Israel for 6 years, exhibits in Zwaim Be Kaffee.

It is a bit hard to understand, but for one of her paintings she burned books. 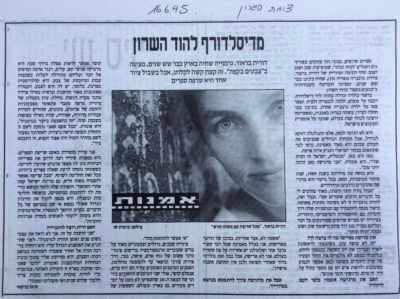 appearing again and again, that is the artistic signature of Dorit Brauer (29), a German artist who lived in Israel for 6 years and exhibits her work in Zwaim Be Kaffee.

Brauer was born and grew up on a farm close to Düsseldorf, rode horses, went to church and to school as every other German girl. She began painting in school and graduated in Art.

After school she wanted to travel and wander around the world.

She heard about the opportunity to volunteer in a Kibbutz in Israel. But instead of going to Israel she landed in Brazil. The powers that move the world – which she believes in – made her fall in love with an Israeli, and together they went to Israel. Since then she has been here.

“From the mentality point of view Israel is my home. I feel much better here,” she says. She left her birthplace in 1989, the year of the German Unification. With every visit to Germany she notices changes, especially that things get more extreme. In fact, being a German is not a simple question in finding oneself. Brauer tries to cope with being German through becoming familiar with Jewish history and mysticism.

On her paintings are burned books, glued on the canvas and on them painted yellow Stars of David and again and again the word Tohuwabohu.

“You burn books, how do you feel about that?”

“It does not make me feel good. When I first came to Israel and attended the Holocaust Day I was in shock. In Germany they hardly teach the young generation about what happened to the Jews during the Holocaust, here, you can see an old man with the blue numbers tattooed in his arm. That was a terrible experience. I felt helpless.”

“Do you feel any guilt about what happened to the Jewish people?”

“Not guilt, but responsibility – the opposite of indifference.

I actually believe that everything is connected and that all of us have a responsibility for what happens in the world. I am not indifferent, but I was born after the Holocaust and therefore have no feelings of personal guilt.”

“But you feel the need to express this in your paintings.”

Her oil paintings are big and very colorful and transform from figurative drawing of the human body, woman and man, through dissolution of form and theme to total abstract.

Her favorite German artists are Joseph Beuys and Anselm Kiefer, maybe the two most important German artists of the 20th century, who also had a lot of influence on artists in Israel and the world.

The influence of Kiefer can be seen in the way she glues straw, leaves, pieces of earth and shells on the canvas. She paints them with thick layers of concentrated color.

She has an excellent feeling for color. Her work is spontaneous and one has the impression that a whirlwind of feelings has been expressed. By looking through her portfolio one notices a sudden change from burning colors – red, orange, black, – to lighter works of art, grey, cold as if covered by a layer of ice.

“That is a result of a visit to Germany,” she says. “Every time I go there a new phase in my painting develops. I have been there in the wintertime and everything was grey and frozen and that is expressed directly in my paintings.”

I am still bothered by the act of burning books. She tells that a friend threw away old books, he gave her a few boxes and when she opened them she discovered that they were about Judaism. Nevertheless she decided to burn them.

“Every burning offers the possibility for something new to emerge. Also the State of Israel was founded after the Holocaust.”

Her research into this theme led her to study mysticism, kabbalah and holistic medicine. She tries to understand the reason that is the source of all creation and embarks on a journey to help people with alternative treatments and positive intentions.

“Do you plan to convert to the Jewish faith?”

“Well, I am thinking about it. I certainly do not see myself returning to Germany.”

She smiles with her blue eyes before she starts her big motorcycle, on which she will drive back to Ramot Hashavim.

A Sunny Day in Tel Aviv.

Meet Dorit – You are invited to view the Guided Imagery Videos, Spiritual Teachings and Spiritual Journeys on Dorit’s YouTube Channel.